Daniel fell off Fuji and miraculously was saved

Rabbi Binyomin immediately contacted the Israeli and British embassies and Mr. Muto to contact the police of the Fuji mountain area. The police contacted the mountain rangers, who said that they were aware that someone fell because a Japanese mountain climber who climbed with Daniel, Mr. Honda, told them.

The month of Adar is the month of many miracles and good luck for the Jewish people.

I am happy to share with you one of the great miracles we experienced in the Chabad House of Tokyo.

In December of 2005, my brother in law was getting married in Paris, and I suggested to my husband to join his family for the wedding as it was a great opportunity to see his family. He told me: "I can't leave in middle of Chanukah, there are Jews whose only connection to Judaism is Chanukah". I offered to do the best I can, but he insisted that it was important to be in Tokyo, and to broaden the activities. He added: "I am sure my brother will be blessed much more, if I do good deeds in his honor". That Chanukah, among the many guests, Daniel Moskovich came to visit from Kyoto. He was doing his Phd at the University of Kyoto and planned to climb Mt.Fuji, during his winter break. On the day of Chanuka, he woke up at 4 am; my husband asked him if he is sure that it is alright to go climbing at this time of the year, and by himself. Daniel answered: "I have excellent climbing gear, I am sure it will be fine". Daniel got some Halva and bottle of water, his Teffillin, some other last minute necessary items, and packed it in his backpack. As Daniel was leaving the Rabbi insisted: "try to find someone to climb with. Don't go yourself. Also, when should I start worrying?" To which Daniel answered: "I will definitely look for someone. If you don't hear from me, in 24 hours, that means there's a problem".

That day, at 3:00 pm, my husband said to me, Efrat, call Daniel, check that he is alright. It will be sunset soon, I just want to make sure". I immediately called but there was no answer. I figured that there was no reception, up so high on the mountain. It takes about 12 hours to get to the top. At 3:30 pm, the phone rings, it is Daniel. His voice is shaky and weak, he says: "Efrat, I am dying. I fell off Fuji. Please call the police and tell them. I am literally freezing."

Daniel then told me approximately where he was. "We will make sure that you will be rescued as soon as possible", - I reassured Daniel. 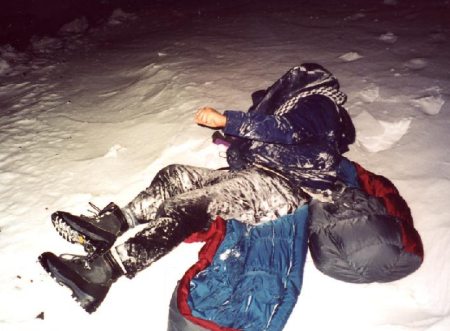 Daniel was taken by the rescue team

Rabbi Binyomin immediately contacted the Israeli and British embassies and Mr. Muto to contact the police of the Fuji mountain area. The police contacted the mountain rangers, who said that they were aware that someone fell because a Japanese mountain climber who climbed with Daniel, Mr. Honda, told them. We pressured them to go up and rescue Daniel as soon as possible. They told us that it took them time to get a group together to go up. We continued to insist that it was a matter of life and death and it had to be done quickly (Daniel fell at around 11:00 am). They made their way up, by car to the 5th level. There was a lot of snow so it was very difficult. All the while we were saying Tehillim that they should find him very soon and alive. We were very worried to say the least.

At 5 pm they spotted Daniel. They called us to say that they found him alive not in good condition, and that they are taking him to the closest hospital. The head of the rescue team, said to my husband: "you are very lucky, because if you would have called us one hour later, when it was dark, we wouldn't have gone up, it would be too dangerous for the rescuers." It took the crew about 2 hours to take Daniel down with the stretcher, by foot to the 5th level. On the 5th level there is a parking place, where an ambulance waited to take Daniel to the hospital. Finally at 9:00 pm he arrived at the hospital. Immediately Binyomin drove to the hospital to be near Daniel. The doctors told him that he fell about 100 meters and was in critical condition and that it would take a long time to recover. During the time Daniel was in the hospital, Binyomin drove many friends and Jewish people who wanted to visit and wish Daniel good wishes. This made him very happy and greatly brought up his morale. Baruch Hashem after 2 and half months Daniel was released from the hospital.

My husband later told me: "Baruch Hashem I did not fly for the wedding, and we were here to receive the phone call from Daniel and be of help. It was a big miracle".

One year later, Daniel met and married Yona Chava who came for a visit from Jerusalem. It was a very happy wedding, celebrating many miracles at once. We had the honor to have the wedding at the Chabad House, and Rabbi Binyomin the officiating Rabbi. Daniel lives with his wife and one year old son Shmuel Shammai in Kyoto, Japan, doing research in Kyoto University.