Adventure on the plane

After I was sure that all the kids had done the ‘mitzva’ I turned to my gentile friends who were mumbling possible explanations to one another until finally one of them asked me, ‘what are these boxes etc.’

Two weeks ago as I was returning to Israel from the USA on an El Al flight, on which I had an unforgettable experience.

I’ve written before about how Chabad Chassidim try to encourage non-observant Jews to do commandments wherever and whenever possible. This is because the Lubavitcher Rebbe revealed that every Jew in the depth and essence of his/her soul wants to do what G-d wants just the main obstacle is ignorance and we are here to dispel this ignorance.

For instance; one thing G-d wants is that all male Jews above the age of thirteen should put on ‘Tefillin’; two square, leather, hollow boxes; one on the arm the other on the head, each containing four precisely written parchments from the Torah.

So as soon as it was morning I stood from my seat, briefly scanned the sleepy passengers, among them a group of young teens with various hair dos, a large church group from the States and an assortment of others. A wave of uncertainty enveloped me unlike any I have ever had that “No one here will put on Tefillin!”

But then I thought “One minute! What would Rabbi Mendel Futerfass (a ‘Chassid’ whose self-sacrifice for others and constant good mood got him seven years in Siberia and kept him alive there as well) do in such a situation?”

Without thinking twice I took out my Tefillin and approached the first teenager figuring he and a few of his friends would say no and I could go back to sleep. This fellow had an amazingly high, puffy ‘afro’ hairdo that surrounded his entire head like a daisy, and asked him if he wanted to put on Tefillin.

Not only did he smile and answer yes in a loud voice for all to hear but he explained to me that all these kids were from a Jewish High school in Texas and, although he had never actually put on Tefillin, he was the ONLY one in the school that had ever seen them. I looked around and saw the other kids gazing at us in wide-eyed, open mouthed shock as I helped him roll up his sleeve and ‘do it’.

I had to part his hair to the right and left (not unlike the Red Sea) to help the head Tefillin fit ‘in there’ which, combined with his tall stature, caused a sensation. Suddenly the other kids could not wait to put on tefillin… and the enthusiasm was contagious; even some of the gentiles seemed interested!

After I was sure that all the kids had done the ‘mitzva’ I turned to my gentile friends who were mumbling possible explanations to one another until finally one of them asked me, ‘what are these boxes etc.’

I asked them if they were impressed and they said yes, very. So I explained to them that Jews have been doing this over 3,300 years, which impressed them even more. But when I added that according to their religion this was obsolete and Jews shouldn’t do it they were shocked and began asking more questions.

So I told them that the Jews believe that there is a Creator who creates, enlivens, and provides for everyone constantly… even them, and that He listens to all prayers too. So it’s totally unnecessary to pray to people or ghosts or spirits etc. Anyway, surprisingly enough they loved it! They were all smiling, shaking my hand (men only), snapping pictures and requesting to pose with me.

Then an Israeli fellow signaled me that he wanted to put on Tefillin, so I left the gentiles and went to him. When he finished doing the commandment, a very old man sitting behind him, next to a woman that probably was his daughter, motioned feebly and mumbled something unintelligible that sounded like a new language.

The Israeli and I tried to figure out what it was then suddenly the old fellow said clearly. “I know what those are! Saved me in the war. I took ‘em with me in my bag and they saved me!”

I never figured out what war he was talking about (maybe the civil war?) but it ended up that he never had actually put on Tefillin in his life and right then and there he put them on for the first time.”

That might have been the end of it but it wasn’t. When he was through I took the Tefillin off him and continued to the next area of the plane to continue asking people and when I returned some fifteen minutes later I saw an unforgettable site. This old fellow had become so energized by the ‘Mitzva’ that he was actually standing in the middle of the aisle, singing some unintelligible song, waiving his hands and dancing! He rose from the crypt! When he saw me he grabbed my hands and we danced together. Cameras were flashing all over the place and everyone was smiling and clapping their hands. (Perhaps the biggest miracle of all was that the El Al stewards and stewardesses also seemed to enjoy it and did not tell us to sit down. 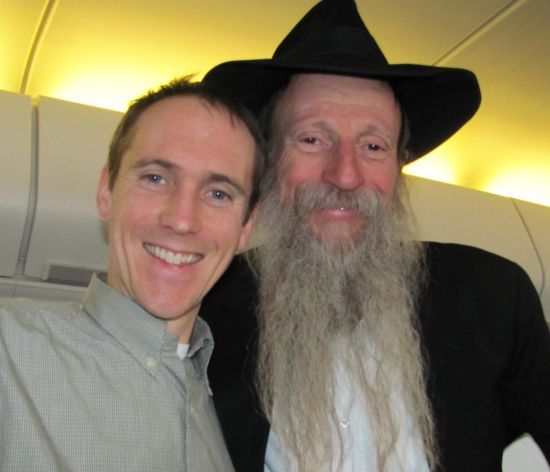 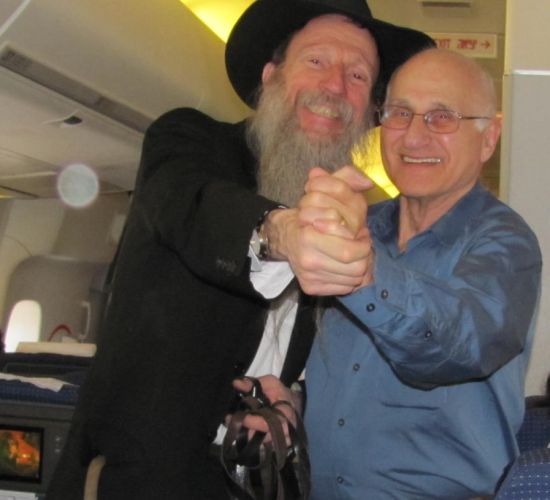 Rabbi Tuvia Bolton and the revived 'old' man
Share it with your friends
Support www.moshiach.ru
New articles
Redemption » The Redemption Revolution: This is how our lives will change forever [567]
Torah study » The Weapon Against Galus [212]
Articles » The Rebbe's holy letter to Mrs. Gansburg [661]
Articles » How the Mighty Have Fallen [748]
Torah study » The Triad of Renewal [647]
Articles » The 3 Roosters Before Moshiach Comes [734]
Kabbalah » The Goring Ox of Gog and Magog [723]
Bnei Noah » Barak Grossberg | Keep The Order [655]
Jewish Holidays » Don’t Read The Megillah Backwards! [548]
Torah study » The Four Dimensions of Exile and Redemption [618]
All last articles