A Japanese man, called Sakamoto san, stopped them. After finding out, what brought them to his part of town, offered to give an office he wasn't using in Asakusa, for free for 1 year, until Chabad House would find another place.

During the days of Moshiach, we see many righteous non-Jews who help the Jewish people in many ways.

We in Japan have been blessed with many such righteous gentiles, who have assisted the Chabad House from its establishment in 1999.

When Rabbi Binyomin Edery was looking for the first house for the Chabad House, he met a wonderful Jewish entrepreneur by the name of Eyal Agmoni, who lived in Japan for some time. He recommended a good friend of his who runs a successful Real Estate Agency, Nord House, in the heart of Tokyo, Muto san. Since that day, Mr. Muto has helped us on a constant and daily basis.

Mr. Muto found the first house for the Chabad House, and the others after. He always offers his help and calls up Rabbi Binyomin Edery late at night, to ask if there is anything that he can do to help. He found places to do the first and only kosher slaughtering in Japan. He found and gave us the space to open the first and only kosher takeaway in Japan, in 2005. He organized kosher food promotions in big international supermarkets, such as National Azabu. He has assisted in countless situations.

Throughout all the years he has helped Chabad House, he has seen and experienced many miracles firsthand. Once, when walking on the street with Rabbi Edery, to find a new place for the Chabad House, a Japanese man, called Sakamoto san, stopped them. After finding out, what brought them to his part of town, offered to give an office he wasn't using in Asakusa, for free for 1 year, until Chabad House would find another place.

Whenever he has a personal request, whether it is business related, family issue, philosophical or practical life questions, he writes a letter in Japanese to the Rebbe, and puts it in one of the Rebbe's volumes of letters. He has received many amazing answers and seen the Rebbe's words fulfilled time and time again. He has joined Rabbi Edery a few times on trips to N.Y. to visit 770 - the Rebbe's synagogue. Now for the "cherry on top" of Mutoh's story, his passport number is 0777077. 770 Backwards and Forwards! Nothing more or less.

He showed it to the Rabbi, and said, G-d wants me to help you. This is my mission.

Recently, Muto san is super involved with the 10 Year Anniversary Project of the Chabad House, this coming Chanuka. Especially with the New Building and Mikveh campaign.

We are sure that just as we have seen the blessings of the Rebbe realized in many aspects of Chabad Japan, so too, we will G-d willing purchase the new campus.

This will be a perfect dwelling place for G-d in the Land of the Rising Sun and a huge stepping stone for the coming of Moshiach Now! 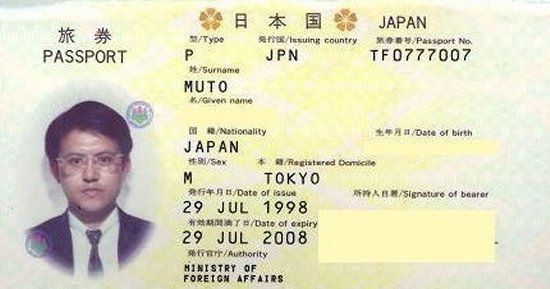