On August 13, Israel and the United Arab Emirates (UAE) agreed to fully normalize relations. So now we can openly state that an emissary of the Rebbe King Moshiach has been operating in the Emirates for many years...

On August 13, Israel and the United Arab Emirates (UAE) agreed to fully normalize relations. So now we can openly state that an emissary of the Rebbe King Moshiach has been operating in the Emirates for many years...

If it had occurred to you last week to type in the name “Israel Buchbinder” in a Google search, you would not see a single result. And this despite the fact that Rabbi Israel Buchbinder has been the envoy of the Lubavitcher Rebbe SHLITA King Moshiach in the Jewish community of Dubai for nine years! Until last week, very few people knew about this and even more so, this was not publicized, since the United Arab Emirates is a Muslim country which until recently, would bar entry to someone with an Israeli passport. Although Rav Buchbinder had an American passport with him, all these years he carefully concealed information about himself.

A historic event happened last week — on August 13, 2020, Israel officially announced a peace agreement with the UAE, and I immediately remembered an article entitled “Our Man in Dubai” which was published two years ago without mentioning names and with the faces concealed in photographs...

The hour is approaching when the Israelis will begin flying from Tel Aviv to Dubai, and now we can already name the secret heroic emissaries by name. In addition to R. Buchbinder, another emissary, Rabbi Levi Duchman from New York is active as well. He has opened a Jewish school for the children of the businessmen in the city. Overall, about 1,500 Jews live in the UAE today.

It all started many years ago when Shimon and Sharon, a young Jewish couple from London, decided to move to Dubai for bisiness. Their relatives were very surprised and tried to dissuade them from this decision, but Sharon, who was born in the Middle East, did not see this as a problem. Of course, Shimon and Sharon had to hide their Jewishness in public, so for a while they felt like Esther in the palace of Achashverosh. In their first year, they would meet local Jews and become friends with them. But there was no community as such in the city.

A year later, when the couple were awaiting the birth of their first child, they felt the need for a real Jewish community — with a synagogue, a Torah scroll, festival prayers, etc. When they were on vacation in Sri Lanka, they met the local envoy of the Rebbe, Rabbi M. Crombie and shared their concerns with him. He decided to help them and started looking for yeshiva students who would agree to travel to a Muslim country. In the end, he found two — they Israel Buchbinder (with an American passport) and Shuki Gur (with a Canadian one). At first they were very apprehensive facing the unknown, but after clearing customs, they gradually calmed down.

This trip was very dangerous, since shortly before that a well-known Arab terrorist had been liquidated in Dubai (presumably by Israeli special services).

Fortunately, everything went well and the two young men arrived in Dubai two days before Yom Kippur. Their meeting with local Jews took place on the 32nd floor of a luxurious building in the apartment of one of the businessmen, overlooking the artificial island of Palm Jumeirah.

On this day, a Jewish community was born in Dubai. More than 50 people came to the prayer services and were pleasantly surprised to see so many of their fellows. Most were businessmen who had come to Dubai, but there were also locals. One of them, a Jew named Levi, said that his parents always called him by the Arabic name Tariq and he was constantly sad because he had to hide his Jewishness. One fine day he got tired of behaving like that and he began to tell all his friends and acquaintances that he was a Jew. Some turned away from him, but in the end he stopped being sad and depressed and turned into a happy and joyful person.

Israel and Shuki spent about ten days in Dubai, subsequent to that, they came for Hanukkah and brought prayer books, mezuzahs and Hanukkah menoras with them. This time they also visited Abu Dhabi, the capital of the Emirates, located on an island off the coast in the Persian Gulf. Abu Dhabi is a major hub for business and oil exports. There, they published the book “Tania” at the instructions of the Rebbe. 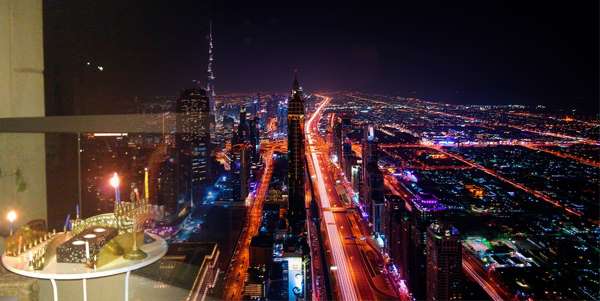 After that Rabbi Buchbinder repeatedly visited Dubai, spreading the light of the Torah and Hasidism there. At Hasidic gatherings with local Jews, he spoke about the prophecy of the Rebbe, King Moshiach regarding the coming Redemption, inspiring the listeners.

One woman invited him to her house to study Torah with her son Torah. At the end of the lesson, she said that she wanted to show something to the Rabbi and took him to the end of the hallway. Rabbi Buchbinder was shocked to see a huge oil portrait of the Rebbe. The woman, in her simplicity, said that every morning she’d face the portrait of the Rebbe and ask to intercede on her son’s behalf, so that with the help of the Almighty he would grow up to be a good Jew.

Another Jewish person, who has lived in Dubai for thirty years, said that his sister married a Lebanese Arab and converted to Islam. She had fought with the Arab constantly for several years. Suddenly she called this person and asked to put up a mezuzah at her. He replied that a Rabbi had just arrived here who had mezuzahs and Rabbi Buchbinder happily supplied a mezuzah to her.

So that no one should think that life in the Emirates is problem-free, Shuki Gur told me that when he was leaving Dubai for the first time and feeling safe, a security officer stopped him at the customs at the airport and showed him a printout with a detailed record of all of his movements in Dubai. Only then did he realize how dangerous their mission was and how the Rebbe King Moshiach was watching over them while they were there.