On Thursday, 22 Tammuz, the world watched Rabbi Gershon Avtzon, Rosh Yeshiva of Yeshivas Lubavitch Cincinnati, proudly deliver the Rebbe’s message from the podium of the United States House of Representatives.

On Thursday, 22 Tammuz, the world watched Rabbi Gershon Avtzon, Rosh Yeshiva of Yeshivas Lubavitch Cincinnati, proudly deliver the Rebbe’s message from the podium of the United States House of Representatives. Rabbi Avtzon was invited by his local congressman, Mr. Brad Wenstrup. Mr. Wenstrup had visited the Yeshiva earlier this year – and was so impressed that he invited Rabbi Avtzon to Washington.

Rabbi Avtzon had previously given the invocation at the Ohio statehouse. The invocation was written by Rabbi Avtzon and approved in advance by the office of the chaplaincy of the House of Representatives.

Almighty G-d, Master of the Universe, I invoke Your blessings today on the members of the honorable institution, the house of representatives of the United States of America. May they humbly serve their constituencies, aware that creating just legislation is one of the Seven Laws that You, Almighty G-d, gave all humanity through Noah as detailed in Genesis. Almighty G-d, as a descendant of hasidic jews who fled the stalin regime who persecuted religious observance, I'm especially grateful an blessed to be in America, the country called the nation of kindness by the great spiritual leader of our generation, the Lubavitcher Rebbe Melech a-Moshiach Rabbi Menachem-Mendel Shneersohn. We thank You for the freedom we have here to practice our faith and we pray for those who still suffer persecution around the world. While legislating, by definition, includes differences of opinion and rigorous debate, I pray that we nevertheless anticipate our shared bright future and the time the Redemption and thus remain one nation, under G-d, indwissable, with liberty and justice for all a men.

The staff of the congressman greeted the family of Rabbi Avtzon, and gave them exclusive access to some of the inner parts of the building of congress, like the balcony of the Speaker of the house and the room where the president waits before he begins his state of the union address.

Rabbi Avtzon was also in contact with the office of Senator Rob Portman (Ohio) and they arranged for a group picture on the steps of the senate. The senator was delayed for a few minutes, so the family started dancing and just then the senator came and joined the dancing and asked that his staff join as well!

The congressman and the senator spoke strongly of their support of Eretz Yisroel, and the Jewish people and they have committed to continue working with Rabbi Avtzon on issues of importance to the Jewish community. 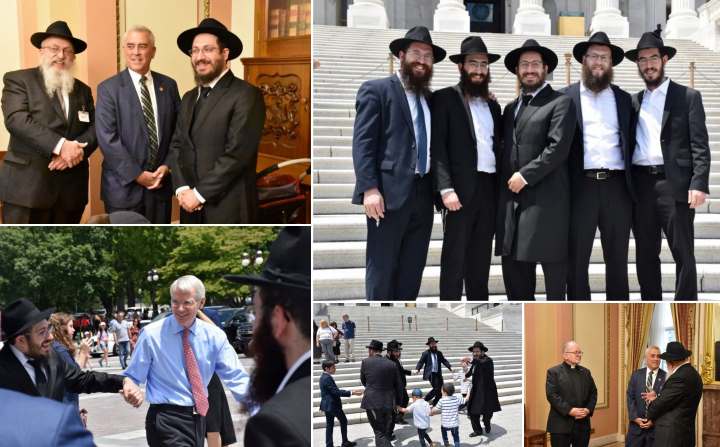